What Will the New Tax Law Mean for Your Paycheck?

So now that the new tax reform bill has finally moved past the debate stage and it’s actually been written into the law, it’s time to start asking the 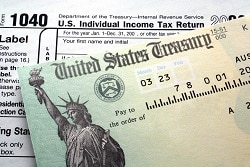 important questions. And to be sure, there are a lot of questions. How will it affect the housing market? How will it affect large corporations, as well as small businesses? Will the rich really get richer? Will the middle class really see any tax relief? Will the new standard deduction amounts wipe out itemized deductions for the large majority of taxpayers? The questions go on and on and the answers often depend on whom you ask.

Expect to See an Increase

So what about the most important question to the majority of taxpayers? You know the one: “What will the new tax law mean for my paycheck?” or “How will the new tax law affect my take-home pay?” The easy answer, in most cases, is that by February at the latest, you should start to see a little more in your take-home pay. There are, of course, many changes in the new law, which represents the largest overhaul of the tax system in decades. Some of the biggest changes include an increased standard deductions, altered tax withholding tables, reduced state and local income tax deductions, and lower individual income tax rates. It’s a lot to take in. But again, most taxpayers will start to notice at least some increase in take-home pay by February.

How Much Will Can You Expect to See

The next question is how much of a difference will you see? What’s your paycheck really going to look like? It will depend on several factors, including your current salary, your filing status, how often you are paid and the current allowances you claim on your W-4. Everyone’s numbers are going to be different, but here is one possible scenario. A single filer with two allowances making $50,000 a year and currently paying about $265 in taxes from each bi-weekly paycheck, could expect to see an increase of roughly $100 in each paycheck.

Calculate the Numbers Yourself

If you want to know specific numbers for your paycheck you will need three things: your gross pay from your most recent paystub, a copy of your W-4 and access to the new withholding tables. Take a look at how much was withheld from your gross income. To determine your new withholding amount, subtract your allowances from your W-4 from the appropriate payroll-frequency factor, i.e. weekly, bi-weekly, etc. You will use that number to calculate your new withholding amount by using the number that corresponds to your payroll frequency and filing status. Lastly, deduct this number from the current withholding from your check, which was the first number you looked at. This is how much of an increase you could see in your check.

So, the good news is most people can expect to see an increase, but there’s another important factor to consider. You need to take a close look at your W-4 withholding amount. The last thing you want to do is have the wrong amount taken out, whether it’s too much or not enough. Because of the new tax laws, you could end up paying too much if your withholding is incorrect. That means you would get more back when you file your return next year, but it also means your take-home pay would not be as high as it could be throughout the entire year. That extra money could come in handy from month to month. On the flip side, if you don’t have enough withheld then you could end up owing money to the IRS come tax time, which no one ever wants.

The long-term effects of the new tax reform remain to be seen, but at the very least most taxpayers should a nice boost very soon. In fact, according to the Treasury Department, about 90 percent of all taxpayers should see an increase. And by law, companies have to implement the new withholding standards by February 15. So, if you don’t want to take the time to try to calculate the change yourself, you won’t have to wait long to see the changes on your paystub.