State Department to Deny Thousands of Passports Due to Unpaid Taxes

Looking to travel abroad sometime soon? Well, you better make sure you’re up to date on your taxes. What do your taxes have to do with traveling? Until 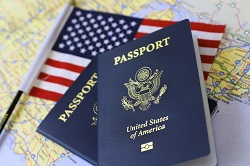 recently, traveling abroad wasn’t too much of a problem for most people, as long as they had a current passport. Well, times have changed and thanks to a new law passed in 2015, your taxes can play a role in determining whether or not you can travel overseas.

Is Your Passport in Danger?

Simply put, the law requires the State Department and the Internal Revenue Service to revoke or deny passports for anyone who has an overdue tax debt of $51,000 or more. Click here for more on this law from the IRS. So does it affect you? First off, if your debt is less than $51,000 then you shouldn’t be too worried. However, if you aren’t doing anything to pay off your debt, then the penalties are likely adding up. The IRS says the amount is adjusted for inflation and it does include all penalties and interest. That means you could soon pass the $51,000 threshold and lose your passport.

No Passports Revoked Yet

So far the State Department has not revoked any passports that have already been issued. At this point, they have only denied applications for new or renewed passports. However, the time could soon be coming for the department to start revoking current passports, as well. The IRS will notify anyone who falls into this category in writing at the same time they notify the State Department. Once a passport is denied, a reversal regarding a denied passport will not be issued until the debt is paid off.

Is the Law Helping?

So has the threat of being denied a passport worked? Are Americans with overdue tax debt paying it off? According to the IRS, the law is working. The agency says that so far, as of the end of June, 220 taxpayers had paid more than $11.5 million in overdue tax debt. Additionally, 1,400 other taxpayers had contacted the IRS and set up payment plans to start reducing their debts. The IRS noted that one person specifically paid off $1 million in tax debt in order to avoid being a denied a passport. So the message is getting out.

Is the Law Fair?

However, despite the reports of success, not everyone agrees with the law. Critics are concerned that affected taxpayers won’t receive enough notice regarding their debt. That’s because sometimes both the taxpayer and the State Department receive notice of the debt at the same time. That leaves little or no time for the person to resolve his or her tax issues before running into passport issues. While the timing of the notice is still an issue, there are some exceptions to protect certain taxpayers. Victims of identity theft are excluded, as are those who claim “innocent-spouse” relief. Taxpayers living in a federally declared disaster zone are also exempt, as are people going through bankruptcy.

Pay Off Your Debt

So, the bottom line is if you plan on doing any travel that requires a passport, then make sure your tax debts are paid off. If not, then you might find yourself limited to domestic travel until your debts are satisfied.