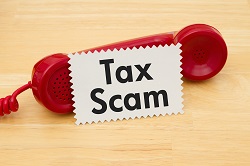 Every time you turn around it seems like another tax scheme is making headlines. Scammers will stop at nothing to get your money. Every year their tactics get more sinister and their schemes seem to get more sophisticated. If you’re not careful even the smartest taxpayers can get burned. In fact, recently, the Department of Justice put the hammer down on one of the nation’s largest tax scam rings.

This scam was so elaborate its operations spanned outside of the U.S., all the way into India. This scam, like so many others, all started with a phone call. That’s right. Despite all the different tech advances and other scam methods, fraudsters still use the phone as their number one weapon in stealing taxpayers’ hard-earned money. Here’s how this latest scheme worked.

Threats of Arrest and Deportation

The scam, which was going on for five years, 2012 through 2016, started with phone calls to unsuspecting U.S. residents. The caller would identify him or herself as an IRS representative or as an official from the U.S. Citizenship and Immigration Services. The caller would then demand that the person pay them for taxes that they really didn’t owe. The scammers would threaten the taxpayer with fines, arrest, imprisonment, or deportation if they did not send the money. They would continue calling until they received payment.

The scam was listed as one of the IRS’s “dirty dozen” tax scam to be aware of, for several years. And scammers didn’t just limit their efforts to tax time either. People received these calls throughout the entire year. You might think that most people would be able to pick up on a scam like this, but thousands of unsuspecting taxpayers fell victim to this scheme. That’s because these scammers are very good at what they do. They know whom to target and they know how to scare them into complying.

The good news is, this operation has been tracked down and caught. According to Attorney General Jeff Sessions, this is the “first-ever large-scale, multi-jurisdiction prosecution targeting the India call-center scam industry.” So far, the Justice Department has charged 56 people and five companies in India for their part in the scheme. Twenty-four of them have already been sentenced. The department ordered 22 of them to pay $8.97 million in restitution to the victims. In addition, 21 of the defendants also have to pay nearly $73 million in judgments.

The Justice Department has created a website for more information about the case. It includes a form for anyone to fill out who believes he or she might have been a victim. You can access it here. After filling out the form, the justice department will review the evidence and then determine if the victims are entitled to any restitution.

Know What to Look for

Despite the arrests, there are many other similar scams going on. And new scams start all the time. These individuals that were caught are not the only ones trying to steal taxpayers’ money by posing as the IRS. So what should you be on the lookout for?

Report it to Authorities

If you get a call out the blue from the IRS, don’t fall for it, no matter how legitimate or serious it sounds. Just hang up and then report the incident to the Treasury Inspector General for Tax Administration (TIGTA) at 1-800-366-4484 or at www.tigta.gov. You also can file a complaint using the FTC Complaint Assistant; choose “Other” and then “Impostor Scams.” It’s your hard earned money, so don’t let a scammer take it from you.