Where’s the Worst Place to Live in the U.S. for Taxes? 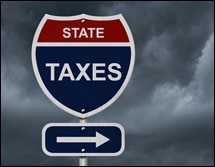 Chances are, no matter where you live you think you pay too much in taxes. The fact is no one really enjoys paying his or her hard-earned money to the government. Of course, most people realize that some taxes are a necessary evil, but when is enough, enough? However, for many people, when it comes to taxes there is some good news; some reason to cheer up. After all, depending on where you live, your tax situation could be a lot worse. For those who are on the short end of the stick, however, if you really hate seeing all your money go to someone else, then you might want to consider moving to another state. So that leads to the question: which states are the worst when it comes to taxes?

A recent study by Forbes looked at the “Worst States for Taxes” and the answers might not really be surprising at all. They could be depressing for people who live in those states, but certainly not surprising for most. So who topped the list of worst states for taxes when it comes to state and local taxes? They don’t call it the Big Apple for nothing. As it does on many other lists, New York came out on top of this list as well. New Jersey was second, right behind its neighboring state and the rest of the top 10 were as follows: Connecticut, California, Wisconsin, Minnesota, Maryland, Rhode Island, Vermont and Pennsylvania.

What did Forbes consider when coming up with the results? They compared local taxes with the effective tax rate for single people who have $50,000 in reportable income. The exact local taxes that were used in the calculation were not specified, but its safe to assume that they included sales tax, property tax and real estate tax, among others. New York leads the way with an effective tax rate of 5.46 percent for a person earning $50,000.

If you are looking for a less expensive place to call home, at least when it comes to taxes, then you might consider the ten states that were deemed the best states for taxes. Topping the list was Wyoming with an effective state tax rate of 0 percent. If you like open space and paying less taxes then Wyoming is the place to be. Speaking of open spaces, Alaska was number two on the list. It also has an effective state tax rate of 0 percent but it’s state and local tax burden percentage of 7 percent was slightly higher than Wyoming’s 6.9 percent. The rest of the top to ten best states for taxes are: South Dakota, Texas, Louisiana, Tennessee, New Hampshire, Las Vegas, South Carolina and Alabama.

The Grass Is Always Greener…Or Not

So if you live outside of any of the 10 worst states for taxes then the next time you feel like your taxes are too high, just remember it could be a lot worse. On the other hand, if you like the Deep South or the great open feeling that Wyoming and Alaska provide, then the grass is always greener when it comes to your tax bill.