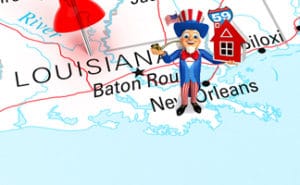 As the people of Louisiana continue to deal with the trials and struggles of some of the worst flooding that the state has ever faced, there is a bit of good news for thousands of taxpayers in the affected areas. So far, at least 40,000 homes have already been affected and at least eight people have lost their lives after 21 inches of rain fell in a 24-hour period, just under the state record of 22 inches back in 1962. According to authorities, more than 20,000 people have already been rescued from the floodwaters and 8,000 of those people were in Shelters. Authorities estimate that in the Livingston Parish alone about 80 percent of the residents will end up with a total loss when they are finally able to return homes and assess the damage.

While paying taxes is probably not the first concern of many of the victims of the flooding at the moment, the Internal Revenue Service has announced that victims of the severe storms and flooding which took place beginning on August 11, 2016 in parts of Louisiana may qualify for tax relief. The news from the IRS comes on the heels of President Obama declaring a state of emergency in Louisiana. With the Federal Emergency Management Agency having issued a disaster declaration for individual assistance, the IRS announced that all affected taxpayers in four major state parishes would be eligible for tax relief. Those parishes include the aforementioned Livingston, as well as the Tangipahoa, East Baton Rouge and St. Helena parishes. In addition, anyone with a business in any of these parishes may also qualify for tax relief as well.

So what does this declaration mean exactly for those affected? In essence, it allows the IRS to delay several deadlines for taxpayers who either live or own a business in the affected areas. Because so many individuals and business owners are likely to lose many of their important records necessary for filing taxes due to the flood damage, this declaration allows them more time to meet important tax deadlines. For example, according to the IRS’s announcement, “certain deadlines falling on or after August 11, 2016, and before January 17, 2017, are granted additional time to file through January 17, 2017. This includes individual returns on extension to October 17, the September 15 deadline for making quarterly estimated tax payments, the 2015 corporate and partnership returns on extension through September 15, and the October 31 deadlines for quarterly payroll and excise tax returns.”

Additionally, the IRS also announced that it will waive failure-to-deposit penalties for employment and excise tax deposits that were due on or after August 11, with the condition that the deposits were made by August 26, 2016. Despite the announcement there is the possibility that some taxpayers will still receive a late filing or late payment penalty notice from the IRS that has an original or extended filing, payment or deposit due date that falls within the postponement period. If you do end up receiving one of these notices don’t ignore it. You should contact the IRS at the number listed on the notice to ensure that the penalty is retracted.

Relief May Be Available to Residents Outside Announced Areas