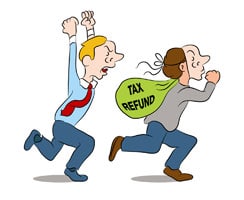 Although most people realize that getting things done in a timely manner is almost always best, unfortunately, a lot of people also like to put things off until another day. Never do today what you can put off till tomorrow. The fact is a lot of Americans procrastinate, even though we know we shouldn’t. People procrastinate for all kinds of things, including their taxes. Everyone knows that putting off your taxes till the last minute is not a good idea, but did you know that there are a lot of reasons that doing your taxes as early as possible is very smart. Not only do you get your refund back sooner (unless you owe money), but you can also incur other benefits as well.

What is Tax Refund Theft?

Tax refund theft or tax-related identity theft has been a persistent problem with the IRS. Late last year, the IRS announced they were stepping up their efforts at expanding and strengthening protections against tax-related identity theft by working with state tax administrators and the tax industry.  In fact, the partnership resulted in success in identifying and testing 10 new data elements with tax returns that are submitted.

A thief will generally use your social security number and file a false return early in the year and collect the refund.  Generally, you find out you are a victim because you get letters from the IRS stating more than one tax return has been filed in your name. Other signs would include: owing the IRS taxes, the IRS has records showing you received income from an employer you do not know, or the IRS is taking collection efforts against you. This information would be communicated to you via the mail. The IRS generally sends notices.

There are many tax troubles that taxpayers can, and do, face throughout the tax season which happens to be here now. From mistakes on your return to scammers threatening to send you to jail if you don’t pay your tax bill, the tax season is rife with possible problems. In fact, would be tax scammers are always on the prowl in order to steal your money and in some cases your identity. The thing to keep in mind about scammers when it comes to taxes is that they don’t procrastinate. As soon as scammers have a chance to claim other people’s tax refunds they get to work. So what’s one of the best ways for you to stop the scammers before they strike? Get started now. That’s because the sooner you start preparing for your return the better chance you have of beating a would be scammer to your refund.

The Key Is to Start Now

Of course, you can’t file your return yet and you don’t even have all your important tax documents in hand, but that doesn’t mean you can’t start preparing now, just the same. There are several important pieces of information you can start collecting and organizing and you can even start doing some calculations as you prepare for the inevitable. For example, you can start to gather and organize all your important receipts for items that can be used as deductions. You can also add up your expenses like medical receipts and gather proof of your charitable contributions. In addition, you can schedule your time with your tax preparer early so you can be one of the first in line. All of these things will help you be ready when tax time does hit. That means you will be in a position to file your return before a scam artist can get to it first.

In fact, other than always keeping your personal information safe and secure from falling into the wrong hands and using a certified and qualified tax preparer, the next most important thing you can do to stop the crooks from beating you to your return is to get it in quickly. Yes, when it comes to taxes, procrastination is always tempting, especially if you owe money, but in the long run, putting your taxes off for another day could end up being very costly. So this year, instead of waiting till the very last minute and driving to your local post office at 11:45 PM on April 18th to drop off your return at 11:59, why not get ahead of the game and start preparing now? You’ll be happier to get it done early and you’ll have a greater chance of keeping those would be thieves at bay.