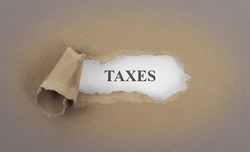 Understanding tax laws and the implications they have on how much you’ll ultimately owe local, state and federal governments help you determine the best way to approach tax-related financial decisions, including how much money to withhold from each paycheck, the most beneficial way to give to charity, and when to take retirement distributions.

But staying on top of current tax laws can be a complex task—even for seasoned financial professionals. Often times what you think you know to be true about taxes—even tips you’ve read and heard a number of times–simply isn’t fact.

Here’s a look at four most common tax myths that cost Americans each year.

Filing for a tax extension can buy you extra time to get your taxes in order if you’re unable to meet the traditional April tax deadline. In fact, taxpayers can even apply for an automatic tax filing extension, which grants the right to officially file annual taxes six months later (by the October extension date) for a specified number of years.

But a tax extension doesn’t mean that you can put your taxes on the backburner until October.; you must still do the work required to reasonably estimate how much tax you’ll owe for the year, and pay that amount by the April tax deadline.

Myth 2: Claiming a home office deduction makes you a target for an audit.

Home office deductions are a tax advantage that small business owners with home-based offices can take advantage of to potentially lessen their tax burden. Though there are several specific rules that apply to determine what justifies a legitimate home office eligible for deductions (sitting on your coach each night to update your business accounting records doesn’t automatically qualify your family room as a tax-deductible home office), there’s a common—and misguided belief—that  those who take this deduction automatically get targeted for a tax audit.  In truth, most small business owners won’t be targeted, unless they’re claiming an unrealistic amount of deductions, or varying what they claim significantly from one year to the next. In fact, The Associated Press reports that fewer than one percent of taxpayers who make less than $200,000 get audited.

Myth 3: Everyone must file a tax return.

If you make money, you must file a tax return, right? Not necessarily, though the criterion of who must file is somewhat complicated, and is based factors including age, income generated, the means by which money was made, and tax filing status.

For example, self-employed individuals (which may include business owners, freelancers and independent contractors with side gigs) must file if they realize at least $400 in income, after they’ve accounted for expenses. Dependents who make at least $1,000 by some means of “passive income” like an inheritance, by collecting unemployment or worker’s compensation, or due to alimony or investment income must file a tax return, too. But for taxpayers who are single, over the age of 65 and make less than $11,699 in a year, filing a tax return isn’t necessary.

Myth 4: Filing jointly as a married couple is to your financial advantage.

Does being married mean you have more money as a couple—and more tax advantages? It depends on how much each of you make as individuals, which tax credits you want to claim–and what itemized deductions you’ll each claim. While it’s estimated that filing jointly is the best choice for about 90% of married taxpayers in order to be eligible for things like the dependent care tax credit, and the ability to deduct college and tuition expenses, and student loan interest, the best way to file isn’t a “one size fits all couples” approach.

When one spouse earns significantly less than the other, for example, filing separately may have benefits. For example, if the lower income earner can take income-related itemized deductions for things medical bills that exceed 10% of taxpayer’s adjusted gross income (AGI), claiming job-related expenses totaling more than 2% of the AGI, or the filer intends to pursue a student loan debt forgiveness plan, it may prove more beneficial for married couples to file separately.