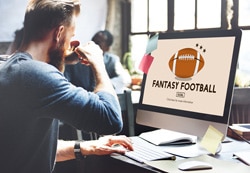 You can feel it in the air. The mornings are a little cooler and days are getting a little shorter. The leaves are even starting to change colors and weekends are full of opportunities to get reacquainted with your favorite armchair or couch and watch some football. For many sports fans, watching football is purely for enjoyment or for the opportunity to cheer on their favorite team, which depending on who you cheer for, may or may not be that enjoyable. However, as sports betting and fantasy sports continue to grow in popularity, watching football is now about a lot more than just relaxing and enjoying the game.

In fact, fantasy football has become so huge it now has its own associations, TV and Internet shows and analysts and commentators dedicated solely to breaking down the fantasy side of the game. With the likes of DraftKings and FanDuel and other national daily fantasy sports outlets the number of fantasy sports players just keeps growing. According to The Fantasy Sports Trade Association (yes, that is actually a thing) almost 57 million people in the U.S. and Canada played fantasy sports in 2014, with those numbers expected to increase. The amount of players has been continually growing each of the last few years and there seems to be no slowdown in sight. Dollars-wise, those keeping track expected fantasy football players to spend an estimated $4.6 billion in 2015. So the bottom line is fantasy sports, especially fantasy football, are huge.

Fantasy Sports Is Usually a Hobby

The reasons people get into fantasy sports vary, but for many players, it’s all about making money. While very few players will actually work to make a living solely on fantasy sports, there are some who do. However, for the most part, fantasy sports players are really just considered hobbyist when it comes to taxation. That is unless you live in New York and Massachusetts, which recently voted to count fantasy sports outlets such as DraftKings, FanDuel and the like as gambling. Despite those rulings, in most cases, fantasy sports is not considered gambling, but that doesn’t mean you don’t have to report your winnings to the IRS. In fact, if you win at least $600 from a single venue then you, and the IRS, will receive a Form 1099 for those winnings. As a hobbyist, you are also allowed to deduct hobby expenses. For example, if you were to earn $6,000 playing fantasy football, but you had to pay $500 as an entry fee, then you could deduct that $500 entry fee as an expense and report just $5,500 as net winnings.

When is Fantasy Sports Gambling?

For those really serious players that don’t fall into the hobbyist category, fantasy football can be considered gambling, which means you are subject to reporting your gambling income and losses. However, in order for that to happen you have to show that you are essentially a professional fantasy sports player and use fantasy sports as your primary source of income. One way to differentiate between gambling and a hobby is whether or not you are betting on a real team. Since fantasy sports are not based on the outcome of an actual team it typically doesn’t count as gambling. On the other hand, if you are betting on the outcome of a particular game with the results determining your wins or losses, then that is considered gambling and is subject to gambling reporting laws. You can learn more about gambling and income losses by visiting IRS.org.

So, if you’re into fantasy football, and you’re good enough to win anything, then make sure you’re keeping track of your earnings, because rest assured the IRS will be. On the other hand, if your fantasy draft didn’t go that well and your team is more of a nightmare than a fantasy, you can report any net losses you take as well. At least that way you can get a small tax break if your team doesn’t pan out.