Which of the Most Popular Tax Breaks Will Congress Axe? 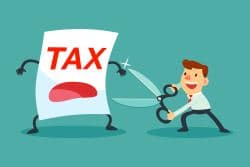 We all know that when it comes to taxes, democrats lean on the side of raising them, while republicans lean towards reducing them. In fact, it’s arguably the biggest philosophical difference between the two major parties. Our new president has made tax reform one of his biggest targets and the republican-led senate and congress are also on board for giving the country its largest tax makeover in decades. For those who side with republicans this sounds like great news. In fact, for many democrats, although they might not like the lawmakers behind the possible cuts, the possibility of a tax cut also has to be good news. After all, no one really enjoys paying too much of his or her hard earned money to the government.

Say Goodbye to Some Nice Deductions

However, before everyone gets too excited about all the possible tax cuts that could be coming, there are some important tidbits that you should be aware of. Republican lawmakers, along with President Trump want to cut taxes, but they don’t want to increase our nation’s budget deficit, either. That means something has to give in order to pay for these tax cuts. So what exactly is the republicans’ plan? Well, it involves some well-liked and oft-used tax deductions on both sides of the political spectrum.

Will Your Favorite Deductions Still Be Around?

Things like the earned income credit and child tax credit, as well as mortgage interest and property taxes to name just a few. These deductions are beloved and counted on by many, but some of them are likely to end up on the chopping block when lawmakers start reducing the tax rates. So which ones are most susceptible to getting the axe? Let’s take a look at what the Joint Committee on Taxation is predicting and break it up into three categories:

Safe, But Could See Changes

Of course, none of this is official and anything is still possible, including nothing getting the axe, or almost all of them. Only time will tell what lawmakers end up doing with all these popular tax deductions. But one thing is for sure, some will be happy and some will not, which just goes to show that the more things change, the more they stay the same.