Unpaid IRS Taxes Could Cost You Your Passport 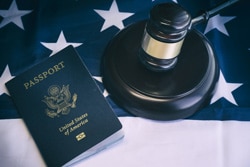 United States citizens have many rights, thanks to the freedoms we all enjoy via the constitution and other laws and amendments. Although many of those rights can be argued one way or another, there are certain rights that people generally take for granted and never worry about losing. For example, did you ever think you wouldn’t have the right to travel? It’s pretty simple, really. If you want to take a vacation, travel for business or visit family and friends you can just get up and go at your leisure, right? Well, that is something that is now up for debate thanks to a new bill that has been signed into law. It’s all part of the H.R. 22 – Fixing America’s Surface Transportation Act, and more specifically a new section that has been added to the Internal Revenue Code. So what does that have to do with traveling, you ask? Under the new section, the government has now given the IRS the power to revoke, deny or limit your passport if you have unpaid taxes of $50,000 or more.

Why on earth would the IRS want to stop you from traveling? If you owe the government money and the IRS thinks you could skip out of town to avoid paying your bill, they don’t want you to have that opportunity. However, even in situations that don’t include the risk of flight, the IRS can still have the State Department revoke your passport simply because you have surpassed the threshold and the IRS has issued a lien on your assets. The law states that the State Department can rescind or limit your passport, or even refuse to grant you a passport altogether if you have a tax debt of more than $50,000.

Penalties and Interest Count Too

That means even though the State Department will do the revoking, it will act when the IRS tells it to. So, anyone who the IRS considers to be a serious delinquent could potentially be denied or lose a passport. As mentioned, the threshold level is $50,000, but keep in mind that tax penalties and interest also count against you. Therefore, even if your actual tax debt is less than $50,000 you could still go over that mark with the added expense of your interest and penalties, which tend to quickly add up.

There’s more bad news, as this new law not only affects international travel, but it could also even prevent some people from traveling domestically. That’s because the Real ID Act, which passed earlier this ear, has made passports a requirement for travelers in several states starting in 2016. Therefore, some people might end up unable to fly domestically if they don’t have their passport. So, you had better plan on paying your taxes if you plan on traveling this coming year. The good news in all of this is that as long as you are paying off your tax debt according to the agreed upon terms with the IRS, then you can still keep your passport and continue to be free to move about as you wish.

A Fight Still to Come?

Of course, as with most tax-related laws, there are some circles that oppose the idea of allowing the IRS to have power over passports. The American Citizens Abroad attempted to sway Congress to reject the new section, but was unable to prevent it from becoming law. However, some question whether or not this law is really constitutional, which means it could eventually lead to a lawsuit and ultimately reach the U.S. Supreme Court. For now, though, it is a law, which means you better be ready if you want to travel and you’re not current with your tax bill.