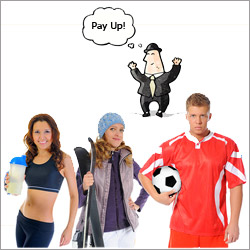 We all know that professional athletes make a ton of money, at least those who play in the three largest leagues in the United States: NFL, MLB and the NBA. Of course, who wouldn’t like to have that kind of regular paycheck coming in? While no one will probably ever shed a tear because an athlete has to pay higher taxes than most people, could it be possible that athletes are held to a different standard when it comes to paying state income taxes?

Most people get up and go to work in the city or town where they live, while some people commute to nearby neighboring states. However, athletes do a lot of traveling all over the country in their line of work. Of course, those people who work in a neighboring state have to pay income tax to the state in which they work, unless it’s in one of the seven states that don’t charge income tax. For the record, those states are:

There are also states that have reciprocal agreements. The following states allow residents of neighboring states to only pay income taxes for the state they reside in even though they may be working in another state:

Every state differs on its treatment of nonresidents working within its state. Some states have a one-day rule that states, if you work in the state for one day, you owe that state income tax. Others have a time limit of which you can be present working in the state without paying income tax. These limits range from 10 to 60 days. However, say you live and work in New York and you travel to California for business and spend a few days actually working, chances are the state of California won’t be knocking on your door anytime soon to collect income tax on the money you earned while you were working in its state. It would be very difficult for the state to track the days and hours you worked there. So, even though by law you should be paying California some income tax, it’s very unlikely that will happen. However, the same is not true for athletes.

Athletes Get Hit From Every Side

Professional athletes’ work schedules can in most cases be easily followed, so it’s easy for state tax officials to track them down and send them a bill. That also means professional athletes face the potential of filing a tax return for every state in which they play (and some cities), if the state requires it. Imagine being a major league baseball player who travels to 20 different states several times throughout the year. You would be responsible for paying taxes for every day you spent working in each separate state.

Is It Too Much?

On top of that, many athletes still have to pay state taxes in their home state on the remaining money after they pay income taxes in other states. Again, professional athletes make a lot of money, but when it comes to state income tax, it seems as though some states and cities are taking advantage of the situation.

In fact, according to a recent report, two former members of the NFL are fighting back against the city of Cleveland, Ohio. At issue is the method that Cleveland uses to tax nonresident professional athletes. The city reportedly calculates these taxes according to the number of games a team played in the city divided by the total of games played for the entire season. Meantime, most cities around the country use a different method, wherein they divide the number of days the team spends in the city by the total number of days worked for the employer. The difference can be huge.

The Proof Is in the Pudding

One former player for the Chicago Bears said that under Cleveland’s method he had to pay local taxes on close to five percent of his income. However, if Cleveland used the same method as other cities he would have only paid on about one percent of his income. Elsewhere, in a separate case, a former player for the Indianapolis Colts claims that Cleveland charged him for taxes for days he wasn’t even in the city. The player was injured and did not travel with his team to Cleveland. Therefore, he claims that the city has no grounds to charge him when he did not perform any services in Cleveland, nor was he even physically present.

The case will be heard in the Ohio State Supreme Court this month and it’s sure to peak the interest from players from all the major professional sports leagues. In fact, all four major professional player associations have already joined in the suit, including the NFL, the NBA, MLB and the NHL. This case will surely be watched closely as it has the potential to affect many different athletes from all over the country.

Things Aren’t Always as They Seem

So the next time, you complain about athletes making way too much money, just remember that they also pay a lot more taxes and their tax returns are probably a lot more complicated than yours. Of course, that being said, most of us would still be willing to trade our paychecks with them.