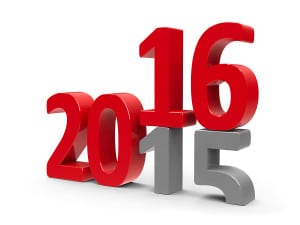 The sooner you’re aware of any changes that the upcoming tax year will present, the more strategically you can plan to maximize your potential tax advantages. Here are some of the changes 2016 will bring for taxpayers.

You’ve scored a few more days to file. Tax procrastinators, 2016 is your year! Because of a Federal holiday that falls on the traditional April 15th deadline, you have until April 18th  to file this year. Taxpayers who live in the New England area get even more time; they aren’t required to file until April 19th, 2016 thanks to Patriots Day.

You might be in a new tax bracket.  Getting a raise, married, divorced, or having increased revenue for a business you own are all status changes that can put you into a new tax bracket. But, you may find yourself in a new bracket without any of those changes in 2016, based on how the Internal Revenue Service accounts for inflation using the Consumer Price Index. In the 2016 tax year, single filers who make between $37, 650 to $91,150 will fall into the 25% tax bracket. For comparison, back in 2010, single filers who made between $34,001 and $82,400 fell into that category.

You may be eligible for continued education credits you previously weren’t. The Lifetime Learning Credit  allows taxpayers to claim up to $2,000 in credit each year for expenses spent on tuition or other qualified education expenses for themselves, a spouse or a dependent claimed on their tax return—but it phased out for taxpayers with an adjusted gross income of more than $110,000 in 2015. In 2016, the adjusted gross income amount used by joint filers who are eligible for the LLC has increased to $111,000.

Though such a small increase in contribution limit may seem insignificant, the inherent “rules” of HSA’s present tax benefits worth leveraging. Like an employer-sponsored retirement plan, HSA contributions are considered “pre-tax” dollars; unused funds can be rolled over from one year to the next. HSA accountholders can choose their own plan administrator and how to the invest the dollars—and can withdraw them tax-free for qualified medical expenses when the need arises. Over time, the increased contribution  limit could add up to far more value than meets the eye.

Alternative minimum tax thresholds will increase. The AMT, or alternative minimum tax, was introduced in the late 1960’s to ensure that the wealthiest taxpayers weren’t able to get so creative in their accounting that they paid less tax than they should. Though Congress did enact a law back in 2013 to adjust the AMT exemption amounts to appropriately account for inflation, your personal definition of how financially well off you are may not coincide with the government—and whether the AMT applies to you. In 2016, the AMT exemptions will both increase by $500, making the thresholds $53,900 for single-filing taxpayers, and $83,800 for those filing jointly.  You can check whether you’ll be helped by this adjustment by checking in with your Form 6251 from last year.