These Tax Benefits Give Single Moms and Caregivers a Big Assist 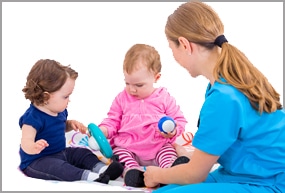 There are a lot of tough jobs people can have in life, but some of the toughest jobs are the ones that often go unpaid. For example, being a single mom is a 24-hour, seven-days-a-week job with no monetary compensation. There’s no question that most single moms have their hands full. Likewise, people who act as caregivers for the elderly or incapacitated adults or children also deal with their own set of difficult circumstances. That’s why any additional help single moms and caregivers can get is well deserved, including during the tax season.

Single Moms by the Numbers

However, first lets take a look at some telling numbers regarding single moms. According to the U.S. Census Bureau, there were roughly 12 million families that identified themselves as single parent in 2013. Of those 12 million families, 83 percent were lead by women. Single moms often have a difficult time obtaining and keeping steady employment, which also puts more stress on their family life. About half of all single mothers have full-time employment for the entire year, while nearly a quarter of single moms are without work for the entire year. One other telling statistic is the median income level of single mothers, which is $26,000. Meanwhile, the median income for married couples is $84,000.

Just like single mothers, those who take care of adults or children who are unable to care for themselves also have a lot on their plates. This too can be a tireless and thankless job, with no compensation. According to numbers from Cargiver.org, there are more than 65 million caregivers in the U.S. who are taking care of someone who is sick, elderly or disabled. Most caregivers are women and about one third of all caregivers actually watch over two or more people.

Give Them a Break

It’s clear that single moms and caregivers deserve some perks at tax time. So with that in mind, let’s look at some of those breaks that they should be taking advantage of. First off, single moms can use the head of household filing status, which means a lower tax rate schedule than filing as single. The lower the tax rate, the lower your tax bill, which means the greater your refund. Daycare is another area that single moms need to take full advantage of. Single mothers should start by using their employer’s daycare flex spending account. This allows them to use as much as $5,000 a year on daycare expenses before taxes. After the first $5,000 any additional money they spend on daycare expenses, up to $6,000 total, can count as a tax credit if they have at least two kids in daycare.

Another tax benefit for single moms comes in the form of the Child Tax Credit and the Additional Child Tax Credit. These can help reduce your tax bill and in many cases actually increase your refund even if you don’t owe any tax. You can click here to learn more about these credits. Lastly, don’t forget about the earned income credit, which can also give your tax refund a nice boost if you qualify.

There are also several tax breaks for caregivers that are often overlooked, which can be costly. For example, you can actually get a tax credit if you send your children to summer camp, as long as you are working and they don’t stay overnight. Caregivers can also claim credit for their daycare costs while they working for their dependent parent or another relative. Their dependent has to be unable to take care of his or herself in order for this to expense to qualify.

If you’re a caregiver you can also qualify for several possible credits around your home. If you make any upgrades to your home to accommodate the person you give care to, those expenses can be deducted as medical expenses. Also, be sure to keep detailed records and receipts of all medical supplies, including medication that you purchase as part of the care you give. You can deduct those as well.

Every taxpayer wants to get the most out of his or her return, but some need those credits and deductions a lot more than others, including single mothers and caregivers. So if you fall into one of these categories, be sure you take full advantage of every tax benefit the IRS makes available. You can learn more about these credits and deductions, as well as any others you might be eligible for, by clicking here.