Surprised With a Tax Bill Regarding Old Debt? The IRS Is Now On Your Side 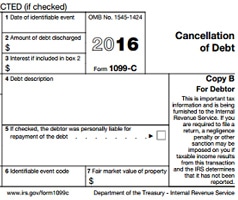 When you have debt that’s forgiven by a lender, it can feel as though a huge burden was lifted from your financial life.  Yet, that feeling may wane if you unexpectedly receive a form 1099-C indicating that the amount forgiven has become taxable income—especially if you never agreed to settle the debt.

While there are some cases when forgiven debt is taxable income you can’t avoid, there are specific tax rules that apply to forgiven debt. Given a recent change to when and how 1099-C forms can be issued for forgiven debt, it’s also possible that the form you receive in the mail about forgiven debt isn’t as threatening as it seems.

Here’s a look at the tax laws that pertain to charged off debt, and when it’s really considered taxable income.

Why a Debt is Charged Off

If you owe debt that you cannot pay—whether it’s a credit card balance, a home mortgage, or a medical bill—a lender may agree to take less than what is owed to consider the balance resolved.

But lenders don’t negotiate your unpaid debt as a goodwill gesture: In some cases, they know that you cannot pay all the debt, so they’re willing to take whatever you’ll pay. In other cases, it’s more financially beneficial to the lender to write the debt off their own books, than to carry the balance you owe and chase you down for payment.

What Happens After a Debt is Charged Off

There are a variety of scenarios regarding which tax implications a charged off debt (or one that is negotiated and considered resolved) present that determine when the debt is finally put to rest.

If one of these circumstances applies to your forgiven debt, it may not be considered taxable income:

If you do receive a Form 1099-C which reports one of these debts as cancelled to the IRS, it means the lender is writing the charged off debt as a tax benefit. The issuance of the form also indicates to the IRS that you’re forgiven amount may be taxable income). If you know that you qualify for one of the exemptions above, file Form 982 (Reduction of Tax Attributes Due to Discharge of Indebtedness) to the IRS when you file your tax return so they know you do not have to pay tax on the amount stated.

Was Your Debt Ever Truly Settled?

If you have an old debt that hasn’t officially been settled, it’s also possible that you could receive a 1099-C form reporting it to the IRS as taxable income.

But as of November 2016, the IRS changed that rule. It now says creditors cannot issue the form unless you’ve explicitly agreed to settle the debt. If you receive a 1099-C from a creditor regarding a debt that you have not settled, you can dispute the matter. Start with the creditor who issued the Form 1099-C and ask them to rescind it, in light of the IRS’ change to the 36 month law.  If they refuse, you can escalate the dispute to the IRS. The general process is to attach a written statement with your annual tax return, but you may want to consult with a tax professional to ensure you properly file the dispute.