Why Not Getting Married Can Be A Tax Advantage 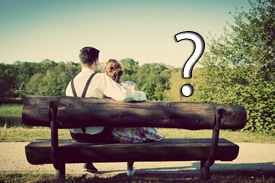 Wedding season is in full force—but if you’re not necessarily sold on the idea of marriage, some recent changes to tax policy as it pertains to unmarried couples who own property together could solidify your resolve to stay together—but legally single—for life.  Here’s a look at how our progressive tax system can work to the benefit or detriment of couples, based on their marital status, income, and the property they own together under the most recent iterations of tax law.

How Our Tax System Views Marriage

Though the experts at the Tax Policy Center say a “marriage bonus” (your tax liability is lower because of marriage compared to what you’ll owe as a single taxpayer) is more common under current tax law than a “marriage penalty” (you owe more tax married than  you would if you were single), whether marriage is better or worse for your tax bill depends on a number variables including your income, credits and deductions you’re able to claim as a result, and your taxable assets.    That’s because once you’re married, the United States tax system considers the household—not the individual—as the “unit of taxation,” explains the Tax Policy Center’s experts.

Though married couples can opt to file their taxes separately as married couples rather than jointly, the Tax Policy Center says that approach rarely results in lower tax liability.  Of course, there are some exceptions: If both partners earn close to the same amount of income, for example, their combined income could push them into a higher tax bracket than they would be in as single married filers, and cause them to lose access to some credits and deductions.

Whether you’ll pay more or less tax as a married couple compounds further when you’re both high-earners: Forbes contributor Tony Nitti explains that once married taxpayers’ adjusted gross income exceeds $309,900, they lose access to 3% itemized deductions. Yet, single unmarried taxpayers can have up to $258, 250 AGI before they face the same limitations.  For unwed parents, the child tax credit starts to phase out when adjusted gross income exceeds $75,000. But for married parents filing jointly, the phase out begins at $110,000. Similarly, the AMT exemption in 2015 for joint filers was $83,400, but $53,600 for single unmarried filers.

If you’re a couple with a significant disparity in your individual incomes, howver, getting married could reduce your overall tax liability, allowing you to be eligible for more personal exemptions, to fall into lower tax brackets, and potentially, face reduced alternative minimum tax (AMT) liability.

In early August, changes to tax laws for couples who own property together but aren’t married could make a strong case for not getting hitched, too.

Forbes contributor Tony Nitti explains the matter in great detail, but it essentially means cohabitants who aren’t married but co-own property can now take double the mortgage interest deduction than they were previously allowed. Nitti explains that Under Section 163(h)(3) the allowable deduction for a qualified residence caps at $1.1 million. Previously, couples who owned property together but weren’t married lost their ability to deduct mortgage interest beyond that cap—despite that each technically owned only half of the property, and filed taxes as individuals.  The cap pertained to the total value of the residence—not the amount each owner/taxpayer held in it.