How to Make Your Kids Work for You at Tax Time 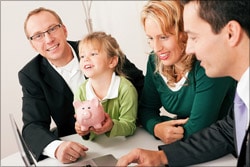 We all know that the cost of raising children can be significant, especially for middle- and lower-income families. There are dozens of regular expenses that families must fit into their budget for their children every year. In addition to the normal every day run-of-the-mill expenses parents face hundreds of other spending options in regards to raising their children, including sports, clubs, hobbies and recreation and entertainment. It’s no wonder that many parents in middle- and lower-income families have very little left over for themselves after taking care of their children first.

While raising children can certainly be expensive, there is a financial bright side to having kids, especially if you have a lot of them. That bright side comes at tax time. Most people don’t like anything about tax time, except the refund, of course. However, did you know that your children could pay big dividends every year during the tax season, which could actually mean a much better refund?

What Is the Child Tax Credit?

While many taxpayers with children are already aware of the Child Tax Credit (CTC), there are still others who don’t know how it works or are not even aware they can use it. However, failing to take advantage of this credit can be a big mistake, which could cost you a lot. So how does the CTC work? According to IRS.gov, you might be able to lower your federal income tax by as much as $1,000 per child under the age of 17, by using the Child Tax Credit. In addition to the age qualification, there are several other standards that need to be met in order to qualify for this credit. You can learn more about those qualifications by clicking here, but they are as follows:

The CTC is fairly simple and it doesn’t take a lot of extra paperwork or time to file. The credit is good for anyone with children that meet the qualifications, but there are some income limitations as well. For example, for married couples filing jointly who have an adjusted gross income of more than $110,000, the credit is reduced by 5 percent. The same goes for married couples filing separately who have an income greater than $55,000 and for single or head-of-household filers with income greater than $75,000.

A common misconception regarding the Child Tax Credit is that you get more money added to your refund. However, while it will definitely help reduce your tax bill, the CTC is not refundable. On the other hand, there is another great prize for parents at tax time called the Additional Child Tax Credit (ACTC). This credit is even better because unlike the CTC, the ACTC is refundable. This little credit is one of parents’ favorites at tax time. So how does it work?

Lets’ say you end up with a child tax credit of $3,000, but your tax bill is $2,300. That means you will get the CTC credit toward your $2,300 bill and owe nothing, but the other $700 will just be lost. On the other hand, if you qualify for the ACTC, then you could receive all, or at least some, of that other $700 back as a refund. While the calculations will vary, typically you will receive a credit equal to the amount of 15 percent of your taxable earned income that is more than $3,000. That means if you qualify for the ACTC then you could actually get a refund if you don’t owe any taxes. How great is that!

Put Your Kids to Work at Tax Time

So this tax season put your kids to work and make sure that you take full advantage of the Child Tax Credit, as well as the Additional Child Tax Credit. You work hard for your money and if you’re like most parents, you probably sacrifice a lot of that hard-earned money on your children, not to mention most of your time and energy. So why not make your kids work for you, at least once a year at tax time. No, they probably won’t be filing your tax return for you anytime soon, but they could help you get a much better return than you might have expected.