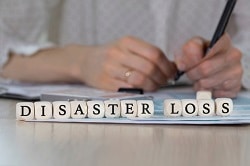 It’s been another very active hurricane season and there are still a couple months to go before it’s over. So far, the biggest and most damaging hurricane has been Florence. The storm pounded North and South Carolina for several days with more than 35 inches of rain in some locations. The death toll has climbed to at least 37 and the damage is still being counted. So far estimates put the property damage at anywhere between $15 billion to as much as $60 billion. At the time of this writing, more than 200,000 homes and businesses still had no power and tens of thousands of people had not been able to return to their homes. In a word, Florence has been catastrophic.

Amidst all this devastation, the IRS recently announced that residents who are feeling the brunt of Hurricane Florence would receive some tax relief. The president has declared both of the Carolinas federal disaster areas because of the massive storm. At this point, the extra time to meet certain tax requirements is available to all residents in areas that have been designated as qualifying for individual assistance by the Federal Emergency Management Agency. You can learn more about whether or not you qualify by clicking here.

For starters, the IRS announced that those affected by Florence would receive an extension to file their quarterly estimated taxes. Originally, they would have been due on September 17. With the extra time, they won’t be due until January 31, 2019. Additionally, taxpayers living in the disaster areas, who had a valid extension to file their taxes by Oct. 15, will also receive more time to file their taxes. According to the IRS, Individuals who reside or have a business in Beaufort, Bladen, Brunswick, Carteret, Columbus, Craven, Cumberland, Duplin, Harnett, Lenoir, Jones, New Hanover, Onslow, Pamlico, Pender, Robeson, Sampson, and Wayne counties may qualify for tax relief.

Changes to the Casualty Loss Deduction

Taxpayers do need to be aware of the changes to the casualty loss deduction due to the Tax Cut and Jobs Act. Before the new law went into effect, all taxpayers were eligible to claim property losses from natural disasters as an itemized deduction. The losses just needed to be more than 10 percent of your adjusted gross income. However, the Tax Cut and Jobs Act changed that rule. Now, you can only claim the casualty loss deduction if you qualify for a federally declared disaster. Plus, your loss deduction must still exceed 10 percent of your adjusted gross income.

Claiming the Casualty Deduction Without Itemizing

In almost all cases, you would claim these losses as itemized deductions. But under the new law, your casualty losses might not even make a difference. Because the standard deduction has nearly doubled, your itemized deductions might total less than the standard deduction, which means it would not be worth it to claim them on your tax return. Fortunately, taxpayers in federally declared disaster areas get a break on this rule. They can take the loss without having to itemize their deductions. But also be aware that the number of losses you claim will be reduced based on the amount you receive in payouts from your insurance company.

If you have been affected by Hurricane Florence and you live or operate a business in one of the counties mentioned above, then make sure you claim your full casualty loss deductions. The damage from this storm has been devastating. So hopefully this announcement by the IRS will offer a little ray of hope for its victims.