The IRS recently released state and county-level migration for 2012-2013. The data is based off individual income tax returns (Forms 1040) filed, received, and processed by the IRS from January 1st to December 31st. The data doesn’t represent the whole population, as many individuals are not required to file a tax return every year. The report did take into account the number of exemptions these returns 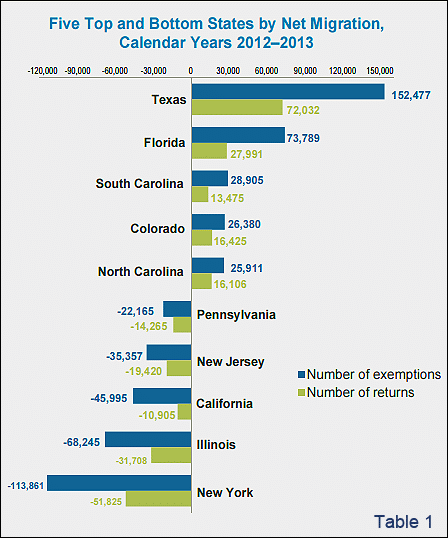 Texas, Florida, Colorado, and South Carolina shined. The state of Texas had the largest influx of new taxpayers for a total of 72,032 new tax returns, representing 152,477 exemptions. Florida was behind Texas, with 27,991 returns representing 73,789 exemptions (see Table 1).

The IRS also broke down net migration by region in the United States. And it seems that the majority of Americans during 2012-2013 migrated to mainly the South and the West. Both the Northeast and Midwest regions cooled off heavily, with the Northeast losing a total of 101,399 tax returns, representing 198,451 personal exemptions.

Many critics will state that these migration trends are due to the fact that housing, energy, and taxes are generally lower in the Southeast United States.  Many baby boomers are retiring and leaving colder states and we believe part of this is highlighted by the fact that the single largest net outflow from 2012-2013 was from New York to Florida.

The IRS also analyzed migration by age group and what they found was that taxpayers aged 34 or younger were twice as likely to migrate to new states than other age groups. It seems the cost of raising a family in the Northeast has gotten too expensive and many cannot afford large mortgages when their student loans are eating up much of their discretionary income.