What Should You Do if the IRS Refunds You Too Much? 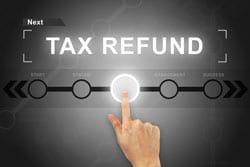 You know that feeling you get when you find some money that you didn’t know you had? Or maybe you’ve overpaid on a bill, like an escrow account for example, and an unexpected check shows up in the mail. That’s a great feeling. Sometimes people are even fortunate enough to stumble across money lying on the ground whose owner apparently is nowhere to be found. Even finding a $20 bill in your coat pocket when you weren’t expecting it could be cause for celebration. The bottom line is it’s always nice to be on the receiving end of money that you either didn’t know you had or that you weren’t expecting to get.

With the IRS Nothing’s For Free

In much the same way, receiving a tax refund is usually a great feeling. After all who doesn’t like to get a few extra hundred or even a few thousand dollars in one fell swoop? In all of these scenarios this money is typically yours to keep without any repercussions. However, what would you do if you ended up getting a much larger tax refund than you were expecting? The tax season ended just a few weeks ago, but while many people have already received, deposited and even spent their refunds, those who waited till the deadline to file could also still be waiting for their refund to come. So what should you do if the IRS refunds you too much money? Can you simply keep it and chalk it up to the belief that it’s their error so it’s their problem? Do you sit on the check for a while and wait it out to see if the IRS figures out its mistake? Or, do you fess up and let the tax agency know they screwed up?

Of course it would be very tempting to keep the extra money and it might feel good to give the IRS a little “payback” so to speak. However, if the IRS overpays you don’t start making plans to take an extra vacation, buy a new car or give your savings account an extra boost. Instead be prepared to give it back. Sometimes, the IRS does find mistakes in your calculations or entries and it will send you a bigger refund than you were expecting. If that is the case it will most likely send you a notice in the mail explaining the reason. However, if you don’t receive an explanation and you know you were over-refunded then don’t spend the money because chances are the IRS will discover its mistake sooner or later.

Act Fast and Fight to Give it Back

The best thing you can do in this situation is contact the IRS immediately and let them know what happened. In fact, if you hold onto the money and the IRS discovers the error six months, or even a year later, they will actually not only expect you to return the full amount, but they will also ask for interest and in some cases penalties. That sounds completely unfair, but it happens more often than you might think. One couple ended up in a heated battle after the IRS refunded them too much money. Even though they attempted to return the money right away and were initially turned away by the IRS, eventually the agency came calling and tried to force them to pay interest. They fought the IRS for two years before the issue was finally resolved. The lesson here is to do whatever it takes to pay the money back ASAP if you know the IRS has made a mistake, even if they tell you everything is fine.

Make Sure It’s Not Your Error

Tax policy states that penalties and interest depend on who committed the error. According to the IRS, “taxpayers are not liable for penalties and interest on erroneous refunds until the IRS asks the taxpayer for repayment. But this is contingent upon the presence of both of the following: The IRS must be clearly at fault in generating the erroneous refund; and the amount of the refund cannot be greater than $50,000.” However, be prepared to fight because the IRS doesn’t give up easily and the agency will always look to find fault in the taxpayer, rather than itself.

If It Seems to Good to Be True it Probably Is

So to recap, if the IRS overpays you don’t spend it and do everything in your power to return the money as swiftly as possible. It’s great to receive an unexpected check in the mail but if it comes from the IRS then always assume a mistake has been made until the agency can assure you otherwise. In the meantime, if you still feel unsure about what to do next, please reach out to a tax pro like Clean Slate Tax and get advice from a tax attorney.

Get a free case review by one of our tax professionals and get started on fixing your tax problems.