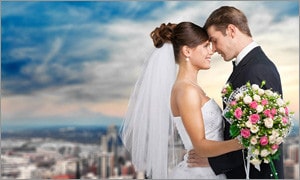 If you got married in 2015, you may need to adjust some aspects of how you approach this year’s tax return. Here some five common mistakes newlyweds make when they first file taxes as married couple, and how to avoid committing them.

Typically, single filers are considered part of a higher tax bracket for less income than married couples filing jointly. For example, a single filer who makes at least $9,226 in 2015 is in at least the 15 percent tax bracket. But a married couple filing jointly stays in the 10 percent tax bracket until their joint income exceeds $18,450. Take a few moments to estimate your tax rate with an automated calculator to see if you’ll fare better by filing separately, or jointly, in terms of your estimated tax bracket.

2. Filing jointly when one spouse has tax debt. If you or your spouse brought some unresolved tax debt into your marriage, it could be considered a shared problem (in the eyes of the IRS) once you file your tax return jointly as a married couple. If the debt remains unresolved and you separate or divorce, that debt could stay with both of you—even if you only “inherited” it by way of marriage. If you want to ensure that tax debt accrued before you said “I do” remains with its rightful owner, consider filing your tax returns separately, at least until it has been paid in full.

3. Missing out on medical expense deductions. If you or your spouse had considerable medical and/or dental expenses in 2015, filing separately may make it easier to qualify for the deduction. That’s because the IRS says a person can itemize only the qualifying medical expenses that are more than 10% of the tax filer’s adjusted gross income (AGI), or medical expenses that are 7.5% of a taxpayer’s AGI for a person who is at least 65 years old. If you file jointly as a married couple and both earned income, your AGI will higher than it would be if you file separately. Because qualifying medical expenses you can deduct are calculated as a percent of AGI, the threshold your expenses must meet becomes higher, too.

4. Not adjusting tax withholding. If you both earned income in 2015 and file jointly, your newly combined household income could put you into a different tax bracket than before you were married. If that happens and you work for someone other than yourself, check in with the amount your employer withholds from your paycheck based on the W-4 form that’s on file. Use the IRS Withholding Calculator to see if you need to adjust your withholding with your employer now that you’re married, and potentially, in a different tax bracket. Ideally, the amount you have withheld from each paycheck will ensure you get a minimal tax refund (which means you didn’t overpay the IRS throughout the year), but significant enough to ensure you don’t owe much money when you file taxes.

5. Not legally completing your name change. Your legal name has to match the name that’s associated with your social security number in order to file taxes. You may have changed your name in your social circles or on your business cards, but if haven’t visited your local Social Security Administration office to file a Form SS-5 to legally finalize the name change process, it’s not complete. (Try to complete your legal name change no later than March to ensure the transition is complete by the April 18, 2016 tax deadline).