IDES is the IRS’s most recent step in their campaign to implement a five-year-old piece of legislation known as the Foreign Account Tax Compliance Act (FATCA). FATCA first took effect last year. Congress passed it to help the IRS fight tax evasion by offshore U.S. taxpayers.

Before FATCA, offshore U.S. taxpayers had to file a Report of Foreign Bank and Financial Accounts (FBAR) with the Financial Crimes Enforcement Network (FinCEN), a wing of the U.S. Department of Treasury.

FATCA introduces a new disclosure form and augments FinCEN’s existing disclosure requirements. FATCA noncompliance can elicit an additional set of penalties on both financial institutions and individuals in addition to those FBAR triggers.

Aside from the new rules FATCA imposes on offshore U.S. taxpayers, the Act also makes some new disclosure demands of both the foreign banks that do business with U.S. expats and the governments in whose jurisdictions this business occurs.

The Act requires that foreign banks report to the IRS certain information about the U.S. citizens who hold significant accounts with them: addresses, account numbers, balances and taxpayer identification numbers (TINs).

Again, IDES is the web-based system designed to facilitate these reports.

If governments in which banks operate do not permit the disclosure of such information, a specialized contract known as an intergovernmental agreement (IGA) must be established. See here for an example of one such contract between the U.S. and Australia.

A keen observer may note that IDES’ rollout has not triggered mass celebration. Indeed, not everyone’s excited about FATCA or incremental steps by the IRS toward its implementation. The legislation’s opponents include: 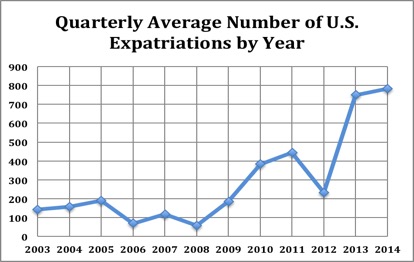 Source: Internal Revenue Service, Department of the Treasury. “Quarterly Publication of Individuals, Who Have Chosen to Expatriate, As Required by Section 6039G.

Forbes gives the anti-FATCA movement short shrift, however, and suggests that readers do not “count on it to succeed. A safer bet is to count on virtually every institution in virtually every country around the globe to disclose–and soon.”

There is a lot of money at stake. That means the U.S. government has a major incentive to persevere in FATCA’s implementation.

To provide some perspective regarding the amount of U.S. tax revenue at stake in this debate, the U.S. Senate’s Permanent Subcommittee on Investigations’ 2008 report found that the U.S. loses approximately $100 billion in tax revenue to offshore tax evasion each year.

See here for the latest available draft of the IDES users’ guide.