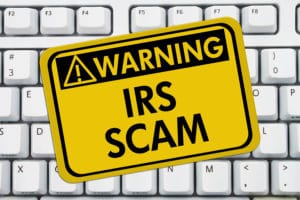 Tax scams and the criminals behind them don’t take a break just because the annual tax season has officially ended.  Here are five of the most popular tax scams that continue to victimize otherwise honest taxpayers, and how to avoid them.

Fake tax returns filed under a legitimate name. The practice of filing a fake Federal tax return under a legitimate taxpayer identity to fraudulently collect a tax refund began way back in 2008, according to a report by CBS News and 60 Minutes; it has cost taxpayers more than $5 billion to date.

Despite pre-emptive measures that the Internal Revenue Service (IRS) put into place in 2015–like limiting the number of direct deposits to one account, various PIN-based and password security enhancement programs, and a pilot program that assigned a unique code to W-2 records–the scam persists. In fact, in March 2016 The Washington Post reported that the very system designed to stop hacks was hacked.

Tax preparation fraud.  When you pay someone to prepare your taxes, you entrust them with your most sensitive information, including your social security number, and bank account information.  But the IRS explains that not all tax preparers are created equal in their level of training, knowledge, or ethical code of conduct they follow.  A dishonest tax preparer can take advantage of their access in any number of ways, including changing numbers on your tax return (like income, expenses, deductions and tax credits) to prepare a return that claims a bigger refund than you’re owed, after you’ve signed off on the legitimate one. They then direct the refund to their account to skim a portion of the funds off the top without your knowledge. That’s just one of the suspected scams that Forbes reports took place at several Liberty Tax Service franchises, 23 of which are currently under investigation for tax preparation fraud.

Phone calls from the IRS.  Phone calls claiming to be from the IRS continue to among the most common tax scams, and have resulted in tax fraud upwards of $26 million, according to an IRS warning issued in April 2016. Though the tone and content of the tax scam calls vary (some are threatening, and some promise a significant refund) any call that supposedly comes from the IRS is one to dismiss:  You can call the IRS by phone but they will not call you for information.

Phishing emails.  Emails from the IRS are another scam tactic used to coerce recipients into providing sensitive data that can be used to further compromise bank accounts, or identity. Much like a phone call, the IRS will not make contact by email with requests for information—no matter how legitimate the message appears. Do not click on any links or attachments from an email supposedly sent by the IRS, which can introduce malware to your computer.

Cyber thieves redirecting tax refunds.  If you haven’t yet received your Federal tax refund and you filed taxes on time, it may be time to use the IRS “Where’s My Refund” software to investigate its whereabouts. As the Detroit Free Press reported in April, cyber thieves took a new approach in the 2015 tax filing season. By targeting the software systems of some tax preparer offices, specifically those that allowed remote access, cyber thieves were able to divert direct deposit of client’s tax refunds into their own accounts.