The IRS recently released enforcement data for 2013 regarding collections, penalties, and criminal investigations. Of particular interest was the data pertaining to IRS tax liens and IRS tax levies. Tax liens and tax levies are enforcement mechanisms the IRS uses in order to secure the repayment of taxes owed whether it be from a business or an individual taxpayer.

For 2013, the number of notices of Federal tax liens field or the number of lien requests entered in the IRS Automated Lien System dropped by 105,763 when compared to 2012.  This represents a 14.94% decrease in Federal tax liens filed by the IRS from 2012 to 2013. The trend in tax lien notices being field has been sharply downward over the four years as illustrated in the bar graph below (figure 1). Even more interesting is that figure 1 represents a 45.09% decrease in tax liens filed from 2010 numbers. 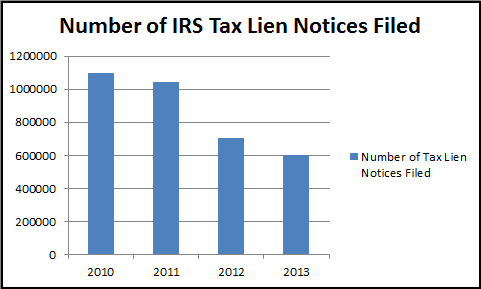 Unlike a Federal tax lien, which is the government’s claim against a taxpayer’s property for back taxes, a Federal tax levy is the actual legal seizure of property for unpaid taxes (without a judgement). In general, this includes, but is not limited to, bank levies (seizing part or all of a taxpayer’s bank account), levies on investment accounts,  or seizing part of a taxpayer’s wages to satisfy unpaid taxes (a form of administrative levy). 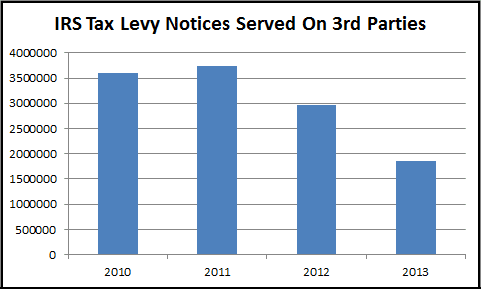 The overall downward trend we see in IRS tax levies and liens can be due to a number of factors including the  IRS Fresh Start Initiave, the possibility that more taxpayers are staying in tax compliance and/or the effects of a strengthening economy. There is no doubt that a part of this downward trend is due to the implementation of the IRS’s Fresh Start Program—the program that is helping taxpayers get back on their feet by easing up on lien and levy filing thresholds.

Get a Free Tax Relief Quote
Get Your Tax Case Reviewed
Request a free tax case review to learn what your potential tax resolution options would be and the associated fees for service. There is no obligation to use our tax services after the free case review.