Applied for a 2015 Tax Extension? Stop Procrastinating and Start Filing 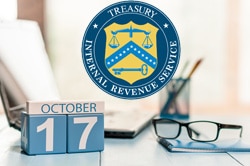 Filed a 2015 tax extension last winter or spring using Form 4868 because you couldn’t complete your 2015 tax return filing by the April 18, 2016 deadline?  It’s time to stop procrastinating, and file your 2015 tax return. As of Monday, October 17, 2016—the extended tax filing deadline—the IRS expects that those who were approved for a tax filing extension submit completed returns, and pay any outstanding tax amounts owed for 2015.

Filing for an extension means the IRS is willing to give a taxpayer more time to get his or her financial house in order to prepare an accurate return—but it doesn’t mean they’re willing to wait for the money a completed tax return indicates is owed. (Technically, any taxes owed for 2015 should have been paid back in April—despite applying for the extension).

In fact, the Internal Revenue Service (IRS) now charges taxpayers a 5% late filing penalty for each month (or part of a month) on any unpaid 2015 taxes not received by the October tax extension deadline, up to a maximum of 25%. The IRS also charges interest and penalties for tax filers who didn’t pay at least 90% of their tax bill back in April—even if they do file by the October 17, 2016 extension deadline.

On top of that, remember that estimated tax payments for 2016 are still due according to the quarterly payment schedule—even for taxpayers who have yet to complete and file a 2015 tax return. On its website, the IRS explains that self employed taxpayers whose 2015 adjusted gross income was more than $150,000 (or $75,000 for those who are married but filing separately), for example, must pay either the smaller of 90% of expected tax for 2016– or 110% of the tax shown on the 2015 return to avoid an estimated tax penalty.

Taxpayers who need to file by the extension deadline must submit tax returns postmarked by October 17, 2016, in order for the return to be considered filed on time.

Failure to do so could mean the IRS takes matters into its own hands, and prepares what is called a substitute for return (SFR) on your behalf.  While letting the IRS handle tax prep may seem like an appealing proposition to tax procrastinators, the return they prepare for you will probably result in a far greater tax liability than the one you’d prepare. Not only will it omit a host of credits and deductions for which you might legally qualify by handling your own tax filing, the SFR will include penalties for your failure to file and/or pay what you owe.

Can’t afford to pay your taxes by the October deadline? The IRS offers a variety of installment payment plans for which taxpayer can apply in order to make smaller tax payments over time. For taxpayers who cannot pay taxes owed due to financial hardship, the IRS also offers opportunities to apply for an offer in compromise, which could result in a reduction of the amount of tax owed. (It’s important to note that the IRS will not accept any offer in compromise applications from taxpayers who have not filed their tax returns).  The IRS also allows taxpayers to apply to delay tax payment collections if they can prove financial hardship.