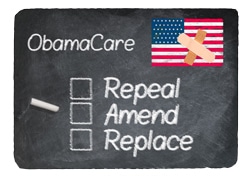 Out with the old and in with the new. That’s the sentiment the new presidential administration has been giving since President Donald Trump won the election back in November, especially when it comes to the nation’s health care program; also known as Obamacare. Obamacare, or the Affordable Health Care Act, has sparked much debate since its inception and the GOP has tried many times unsuccessfully to repeal it. However, now that republicans control the House, the Senate and the nation’s highest office, it seems like a forgone conclusion that the ACA is a goner, at least as we know it now. There is much debate on how repealing the ACA will affect our country’s taxpayers, but according to one taxpayer advocate group, Americans for Tax Reform, getting rid of Obamacare will help the middle class by repealing several tax laws currently (or soon to be) in effect under Obamacare, including the following:

It remains to be seen how quickly the new administration moves forwards with its plans to repeal and replace Obamacare and how it will affect our country’s healthcare system. It will also be interesting to watch how much tax savings our nation’s taxpayers will actually see. In any case, it seems certain that a change is coming, ready or not.